3 Kenyan hotels among the best in Africa

Sonia Martinez July 24, 2022 Kenya Comments Off on 3 Kenyan hotels among the best in Africa 19 Views

Kenya has continued to assert its place in the world of global tourism after three hotels have been ranked among the best in recent years Travel + Leisure Magazine Awards.

The Manor has consistently ranked among the best hotels in the world and continues to dominate, according to the magazine’s standards in terms of facilities available, location, food, service and value to customers.

Over the years, the Manor has also been one of the most Instagrammed properties in the world. Spread over 12 acres, the hotel offers world living with an exceptional appeal.

“With its imposing façade, elegant interiors, leafy gardens, sunny terraces and delightful courtyards, guests often remark that it feels like stepping into the movie Out of Africa: in fact, one of the twelve rooms is after named by author Karen Blixen.

“One of the most intriguing things about Giraffe Manor is its resident herd of Rothschild giraffes, who come morning and night to visit and stick their long necks in the windows in hopes of a treat before retiring to their forest sanctuary,” it says in a statement on its website.

Angama Mara, on the other hand, sits above the bottom of the African Rift Valley overlooking Kenya’s Maasai Mara.

The lodge offers intimate services at its two intimate camps, each consisting of fifteen tented suites, a private airfield and access to the Mara.

Located on the private corner of the Masai Mara, andBeyond Bateleur Camp is a state-of-the-art facility offering game drives, wildlife adventures and bush walks, among other activities.

Travel + Leisure invited their readers to vote for their best global facilities between October 2021 and February 2022 before later sifting through the responses to present the list. 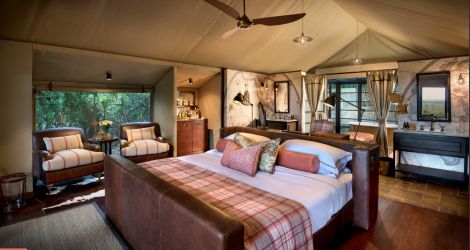 A bedroom at andBeyond Bateleur Camp.