The victory of Ruto, who was vying for a United Democratic Alliance (UDA) ticket, was the culmination of a long campaign period in the country. Ruto assembled a series of strategies in the hotly contested campaigns.

He deployed point men in strategic locations that helped him beat up Raila.

Kenya Kwanza Moses Wetangula, Musalia Mudavadi and Governor Alfred Mutua during a meeting at his official residence in Nairobi on May 9, 2022″ typeof=”foaf:Image”/>

Directors of DP William Ruto and Kenya Kwanza Moses Wetangula, Musalia Mudavadi and Governor Alfred Mutua during a meeting at his official residence in Nairobi on May 9, 2022

Although the district voted for Ruto’s main opponent in the past, Ruto received the majority of votes in the district with 255,906 votes, while his rival Raila Odinga received 145,280 votes.

The votes Ruto received in the county were the highest in the entire western region, proving the important role played by Wetangula.

In addition to the votes Ruto received, Wetangula’s party also won the governor and senator for Bungoma County.

the previous Nyaribari Masaba MP was among the foot soldiers who led Ruto’s campaigns in the Nyamira and Kisii districts of South Nyanza.

Although Machogu and his compatriots from the United Democratic Alliance (UDA) lost their candidacy for governor, they delivered a basket with 135,326 votes from Kisii County. 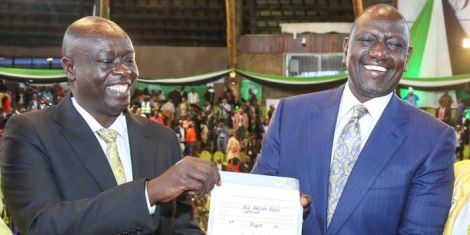 President-elect William Ruto and his running mate Rigathi Gachagua present the Bomas of Kenya with his certificate on Monday, August 15, 2022.

The leader of the Orange Democratic Movement, Raila Odinga, received massive support from Mombasa County in the last general election.

Raila has been dominating coastal politics since the famous Pentagon in 2007, when Tourism Cabinet Minister Najib Balala led ODM charges in Mombasa.

However, Ruto received 113,700 votes, accounting for 41 percent of the county vote. In addition, Nyali MP Mohammed Ali alias Jicho Pevu defended his seat on a UDA ticket, increasing the number of UDAs in Parliament.

Deputy President-elect Rigathi Gachagua is also among the leaders who played a crucial role in the run-up to Kenya Kwanza’s victory.

After the dispute with President Uhuru Kenyatta, the promise to have Ruto as the desired successor was withdrawn.

However, with the entry of Gachagua as DP Ruto’s running mate, Kenya Kwanza managed to consolidate strong support from the vote-rich region.

In total, Ruto received 2.9 million votes from the 10 districts of the Mount Kenya region. The outgoing Vice President received over 80% of the votes from Murang’a, Nyeri and Kirinyaga counties. 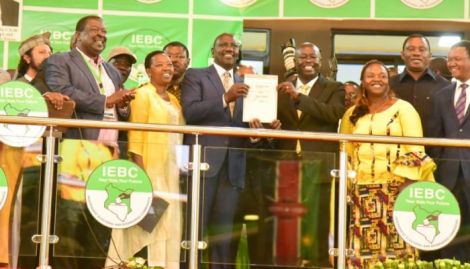 William Ruto on the left holds his certificate with Rigathi Gachagua on the right accompanied by other Kenyan Kwanza leaders at Bomas of Kenya on August 15, 2022