Maendeleo Chap Chap, led by Machakos Governor Alfred Mutua, the Pamoja African Alliance (PAA) led by Kilifi Governor Amason Kingi were among the parties conspicuously absent from an official list of parties in the Kenya-Kwanza coalition.

In a statement on Sunday June 5, the Office of the Register of Political Parties (ORPP) confirmed that only 11 parties formed the Kenya-Kwanza-Kwanza coalition.

The other eight parties later included in the coalition party include Moses Kuria-led Chama Cha Kazi, the Communist Party of Kenya (CPK), the Devolution Party of Kenya (DPK) and the Economic Freedom Party (EFP).

“The Registrar of Political Parties announces to the public that the 11 political parties listed below have been confirmed as genuine members of the Kenya Kwanza Alliance (KKA) under the Political Parties Act 2011,” reads part of the notice.

In his role, Mutua would report directly to Amani National Congress (ANC) party leader Musalia Mudavadi, who would serve as chief minister.

Mutua further indicated that his position would also include a ministerial portfolio in infrastructure development.

However, the duo have faced hurdles since plotting their exit from Azimio la Umoja after claiming they were not treated as equals.

In particular, their agreement with Azimio tied them to the coalition for at least six months – three months before and after the general election – although they have since questioned the legality of that provision. 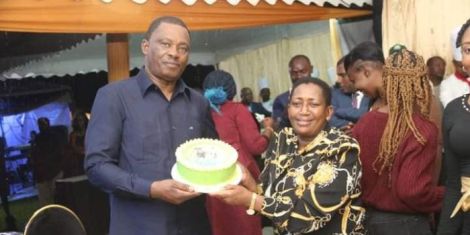