KeNHA announces the closure of Uhuru Highway and Mombasa Road

Sonia Martinez May 7, 2022 Mombasa Comments Off on KeNHA announces the closure of Uhuru Highway and Mombasa Road 34 Views

Several roads in Nairobi will be closed on Sunday May 7th as Kenya hosts the Nairobi City Marathon.

In a warning shared by the Kenya National Highways Authority (KeNHA), city residents have been informed that the Uhuru Highway and Mombasa Road will be affected by the closure.

Motorists in a rush hour traffic jam on the Uhuru Highway in Nairobi on October 17, 2019.

The intersection of Mombasa Road and Likoni Road will be closed between midnight and 10am.

The Lang’ata Road section will be closed until 6am on Sunday. Uhuru Highway will be closed between midnight and 2 p.m., while Douglas Wakiihuri Road will not be used from midnight today and until 5 p.m. Sunday.

“Drivers are advised to avoid the closed sections of road and follow available alternate roads as directed by local traffic officers,” KeNHA said.

“The marathon route runs across a variety of roads, including the Nairobi Expressway.”

Sports Cabinet Secretary Amina Mohammed described the marathon as the perfect tribute to President Uhuru Kenyatta for his immense contribution to the sports industry and legacy in infrastructure development. 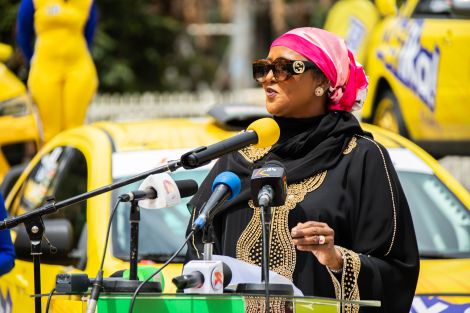 Sport CS Amb. Amina Mohammed delivers her speech at the start of Team Betika at Nyayo Stadium on June 4, 2021

“This will be an international marathon held on a legacy project of His Excellency President Uhuru Kenyatta. It is a perfect tribute to his legacy of infrastructure development and his contribution to sport.

“The Nairobi City Marathon will take place over the next 10 years and we hope it will continue to commemorate the tremendous milestones achieved by the President during his tenure,” stated CS Amina.