Mixed reactions when Balala asks Ruto for a job

Why we can’t go back to the Shamba system

Cabinet Secretary for Tourism Najib Balala provoked mixed reactions from a segment of Kenyans and President-elect William Ruto’s allies after openly declaring that he was ready to serve the new government.

Balala On Friday, September 9, Balala expressed interest in working in Ruto’s government, adding that he is willing to work in any capacity.

“I am happy and humbled and thank President Uhuru Kenyatta for giving me the opportunity to serve the nation. I welcome President Ruto and I am ready to serve in his government whenever the need arises,” he said.

However, his feelings aroused the wrath of Ruto’s die-hard Kapsaret MP Oscar Sudi and lawyer Miguna Miguna, who accused him of changing allegiances.

Kapseret MP Oscar Sudi addresses the public on Saturday 2 July 2022 during a campaign.

In response to Balala, Sudi shared an old clip in which CS openly criticized the Kenyan Kwanza team led by Ruto, who had criticized CS for taking part in campaigns. “Let’s not forget,” Sudi captioned the video.

On the other hand, Miguna said that CS had served in government for so many years and that it was time for him to take a back seat.

“To my friend Balala, you are not the only Kenyan born to serve as the Cabinet Secretary for Tourism. You have held this position for more than 15 years. That’s enough. Go on. Retire. Find something else to do. There are 35 million unemployed Kenyans,” he said.

However, other Kenyans disagreed as they congratulated CS on its willingness to work with the new government.

“I like this guy. His loyalty is to the government and not to the parties. He knows how to survive and thrive in any environment. He’s focused on his role,” said Bernard Otieno.

In particular, a section of online users praised him for calling on the four commissioners of the Independent Electoral and Boundaries Commission (IEBC), headed by Deputy Chair Juliana Cherera, over their opposition to the March 15

Notably, Balala was the first cabinet secretary under President Kenyatta’s government to publicly congratulate Ruto on his election as President-elect.

Balala was appointed to the cabinet by Uhuru in 2013 and served two terms in the Jubilee Administration. 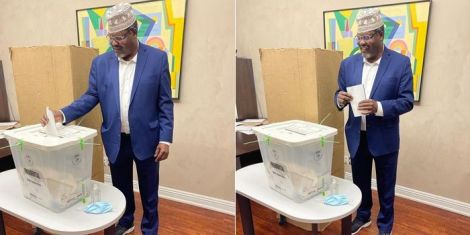